Pavement makes way for grass to counter waterlogging in Arnhem

The Bremstraat in Arnhem has embarked on the GreenParking pilot. The Bremstraat is a sharply sloping street. Severe downpours regularly cause waterlogging at the foot of the street. One of the objectives of the pilot is to contribute to resolving this problem. During the pilot, 40 metres of pavement from the parking lane have been replaced by grass tiles. The goal of such greening is threefold: rainwater collection, cooling during hot days, and enhancing the beauty of the street. The pilot has been initiated by the residents, supported by the GreenWest residents’ initiative and the North-West Living Environment Team of the municipality of Arnhem. Local residents have removed the pavement themselves. In June 2018, the success of GreenParking will be assessed.

The plan has been conceived by a local resident who is active in GreenWest Arnhem, and an initiative group focusing on sustainable projects in three neighbourhoods in Arnhem West. The residents have removed some 4,000 bricks from the parking lane. The municipality of Arnhem has stored BigBags containing the bricks on its civic amenity site. The municipal contractor subsequently set to work on placing kerbs, removing some sand, and laying lava substrate. The grass tiles have been supplied by the Firmus Products BV company.

Since the completion of the project, residents have watered and mown the grass. The grass tiles are composed of a plastic “honeycomb” measuring 1 by 1 metre. This is filled with black earth, on which the grass grows. The tiles are delivered with fully grown grass that has been mown several times. The grass plants are located just underneath the plastic rims of the tile, which means that cars drive over the plastic rather than the grass plants.

GreenWest Arnhem, a local sustainability initiative, will evaluate the pilot towards the end of the one-year trial period. The grass tiles have been paid for by the local resident who submitted the plan to the 2016 Neighbourhood Award competition organised by the Municipality of Arnhem. The award (€ 1,000) received in October 2016 covered the costs of 40 grass tiles. In consultation with the municipal authorities, an agreement has been set down regarding the pilot. The municipality paid € 2,000 for the work done by the contractor. Local residents take care of management and maintenance (watering, mowing, manuring). The municipal commissioning procedure ran from February to June. Consequently, the grass was laid in June rather than in March/April. The plan submitted to the award competition proposed grass tiles on both sides and along the entire length of the street. This calls for a budget which is 20 times higher. If the pilot is successful, this proposal will once more be considered, as will its expansion to other streets and neighbourhoods. The municipality of Arnhem has not made any commitments in this respect. The initial responses in the neighbourhood were positive. Residents helped remove the bricks and water, and mow the grass. The grass has come through the hot spell in June 2017 in good shape. 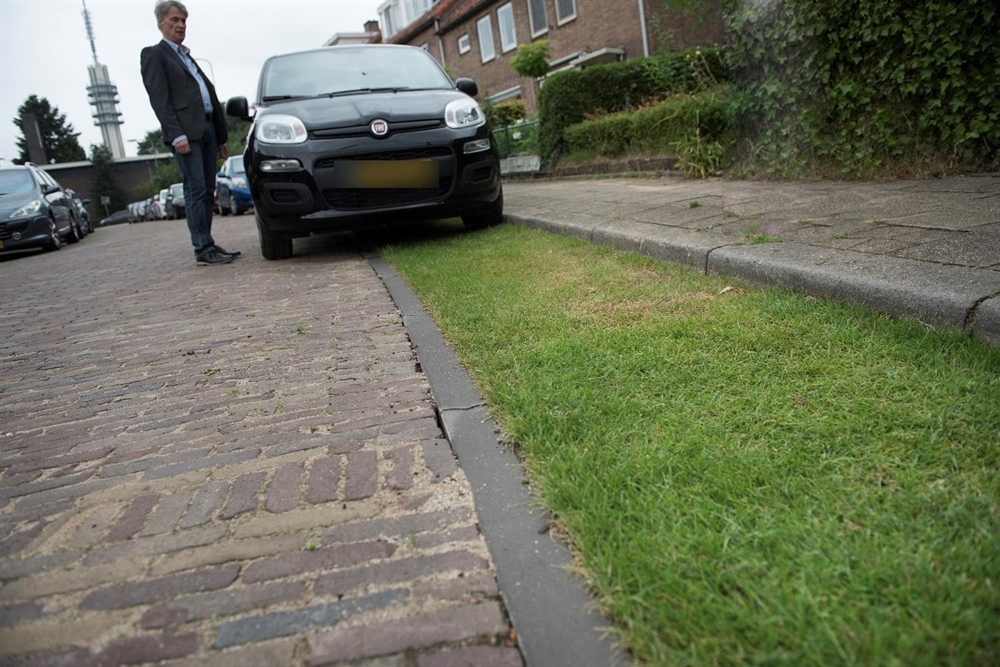