Up to 1996, high water levels caused the Oude Maasarm (Old Meuse branch) river, flowing parallel to the river Meuse between the towns of Ooijen and Wanssum, to overflow. As a result, residents in this low-lying area were frequently faced with waterlogging. For that reason, the Oude Maasarm river was cut off from the river Meuse in 1996, following the floods of 1993 and 1995. This constituted a short-term solution, as this dam could actually cause waterlogging at other locations. Consequently, a sustainable long-term solution needed to be developed. This resulted in the Ooijen-Wanssum natural climate buffer. 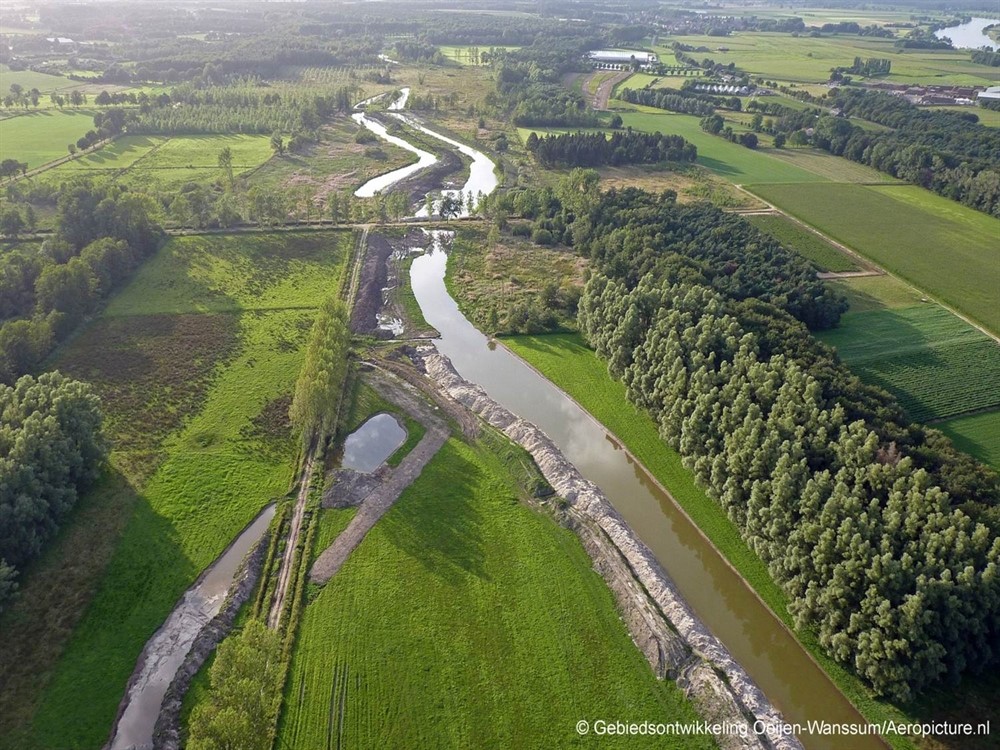 What does the climate buffer entail?

The Oude Maasarm river was converted into a climate buffer. To this end, its riverbed was excavated, and a considerable section of farmland was converted into nature. This allows this Meuse branch to fill up again during high water levels in the river Meuse. The major advantage of this measure is that it lowers the river water levels, thus reducing the probability of overflowing.

The Ooijen-Wanssum climate buffer is a key component of a larger, integrated area development (opens in new window) (refers to another website), whose plan was elaborated between 2012 and 2016. This plan takes account of safety, nature, liveability, and economic development. The area development project involved five government bodies: the Ministry of Infrastructure and Water Management/Rijkswaterstaat; the province of Limburg; the municipality of Venray; the municipality of Horst aan de Maas; and the Limburg district water board.

How is the river allowed more room?

The area is owned and managed by Staatsbosbeheer, the Dutch government organisation for forestry and management of nature reserves. This organisation supervised the project. The climate buffer was intended to allow the 10-km long old river branch to keep pace with the main river and to lower the river water levels. To achieve this goal, several measures have been implemented within the framework of the Ooijen-Wanssum area development:

If the Meuse water levels continue to rise, the Oude Maasarm river will fill up entirely and flow along with the river Meuse, causing the entire area between Ooijen and Wanssum to inundate. This is expected to occur at an average of once every three to six years.

What results have been achieved so far?

So far, the construction of the climate buffer has produced the following results: