Room for wadis and greenery in Nijverdal village centre

Prior to 2015, Nijverdal village centre used to be crowded with traffic. This has changed with the construction of the Salland-Twente tunnel: there is much more room and the streets are much quieter. The municipality of Hellendoorn has capitalised on this change by giving the Nijverdal village centre a full makeover. In the Nijverdal Village Centre Masterplan, the pursuit of a pleasant and beautiful centre goes hand in hand with climate adaptation. A key element of this plan is the Grotestraat, in which the bulk of the work has already been completed.

How has the plan been developed?

Nijverdal is situated between the hills of the Sallandse Heuvelrug and the Reggedal valley. The difference in elevation between these two areas is more than 30 metres. The village itself also features differences in elevation and in landscape. Such differences are manifestly reflected in the new Grotestraat, e.g., in the planting: towards the hills, the street is planted with purple-white plants; towards the brook valley landscape, the plants are white-blue. The landscape qualities of the Sallandse Heuvelrug hills and the brook valley can thus be perceived and experienced right up to the centre of Nijverdal. In the low-lying part of the Grotestraat, several wadis have been constructed to collect water during severe downpours. The wadis feature abundant shade and greenery. Several of the wadis are bordered by sidewalk cafés. 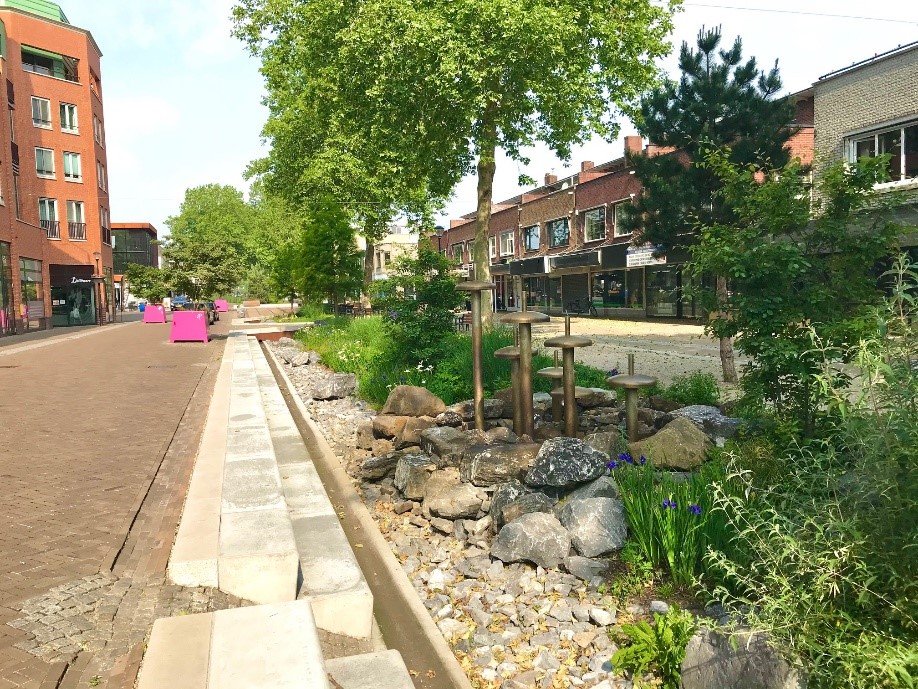 How does the design help to combat waterlogging and drought?

The municipality has disconnected the higher part of the street from the sewer system. Rather than ending up in the sewers, rainwater that falls on the pavement will flow to the locations where trees have been planted. The water is subsequently buffered underneath the vegetation; eventually, it evaporates via the tree foliage. The wadis are located in the lower part of the street and have a water storage capacity of more than 750 m3. During torrential rain, the wadis collect the rainwater running off the hill. This water is subsequently gradually discharged to the Regge stream. Collecting and storing a maximum of water also slows down soil dehydration.

What other benefits are there?

The wadis, with lots of greenery and trees, not only help to combat waterlogging and drought. They also make pleasant and attractive spots for a brief repose. During hot days, you can relax in the shade beside the wadis. The greenery attracts insects and birds, which enhances the biodiversity. With more room for greenery, seating areas, and sidewalk cafés, the Grotestraat has become much livelier and greener. The new design thus contributes to an appealing, healthy, and liveable village centre. 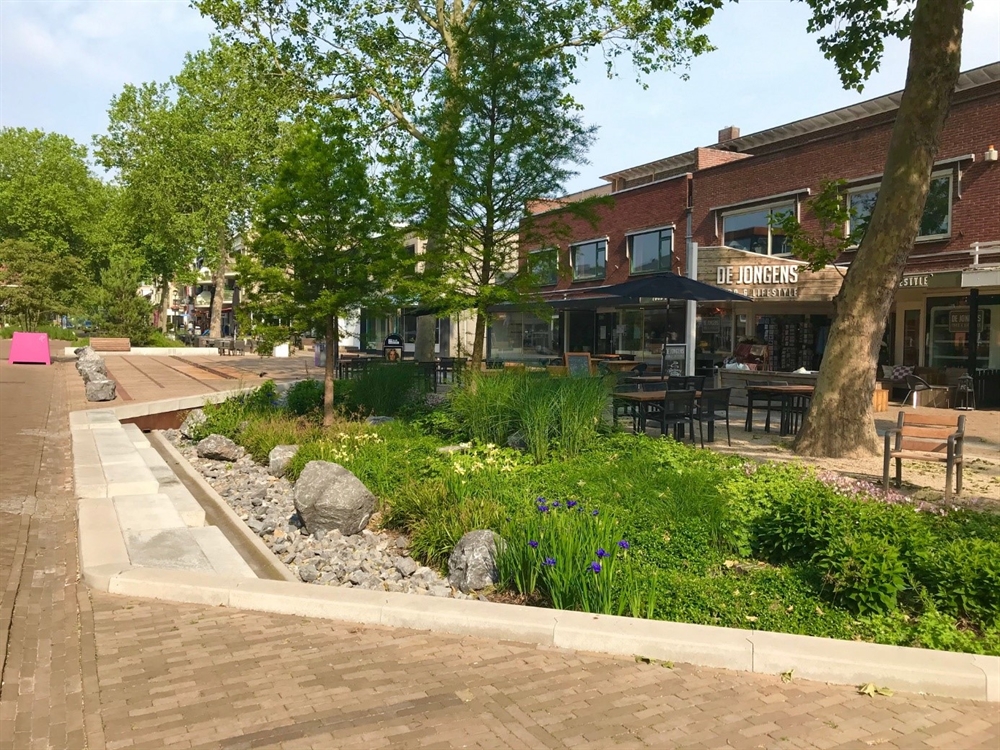 The project has been carried out by a construction team partnered with Dusseldorp ISM. Communication with stakeholders was an important element during the process. Residents and entrepreneurs could contact the local manager if they had any questions, and weekly open houses were organised. As a result, no complaints were received during the execution of the project.

Ensure wide support for the plan among stakeholders. Three co-creation evening were organised for the Grotestraat design, in collaboration with OKRA and with Dusseldorp ISM for the final evening. These evenings have enabled the residents to exert some influence on the design. This has garnered wide support for the new plans. The wadi and consequently the rainwater collection in the village centre have thus been designed in collaboration with the residents.