The frequency of dry periods and severe downpours is on the rise in the Netherlands. That is why rainwater collection is becoming increasingly important. Homeowners can do their part by disconnecting their downspouts from the sewer system. Gert Ploeg, councillor in the municipality of Barneveld, has opted for constructing a water storage area underneath his garage.

What was the reason for constructing a water storage area?

For more than two years, Gert Ploeg had been exploring ways to collect even more rainwater. He already had three rain barrels collecting water. He is still using the water from the rain barrels for watering his plants and to provide his chickens and birds in the garden with drinking water. However, Mr Ploeg wanted to do more. It bothered him to see clean rainwater being drained away in the sewers: ‘Because of the dry summers over the past three years, we have been using valuable drinking water to irrigate our decorative and vegetable gardens. That is unacceptable.’

How did Mr Ploeg discover that he could collect water underneath his garage?

Mr Ploeg has conducted much research into ways to collect water near his house. Initially, he regarded a large water bag in the crawl space underneath his house as the best option. However, this solution would cost between five and six thousand euros: an investment that he would never recover, not even with a municipal grant. He then came up with the idea of exploring what the crawl space underneath his garage looked like. By drilling several viewing holes in the floor, he discovered an empty space totalling slightly more than twenty cubic metres. Gert Ploeg: ‘You would be hard-pressed to find a better, sturdier, and bigger place.’ Moreover, it is perfectly cool and dark, which means no algae growth in the water.

How does the water storage area underneath the garage work? 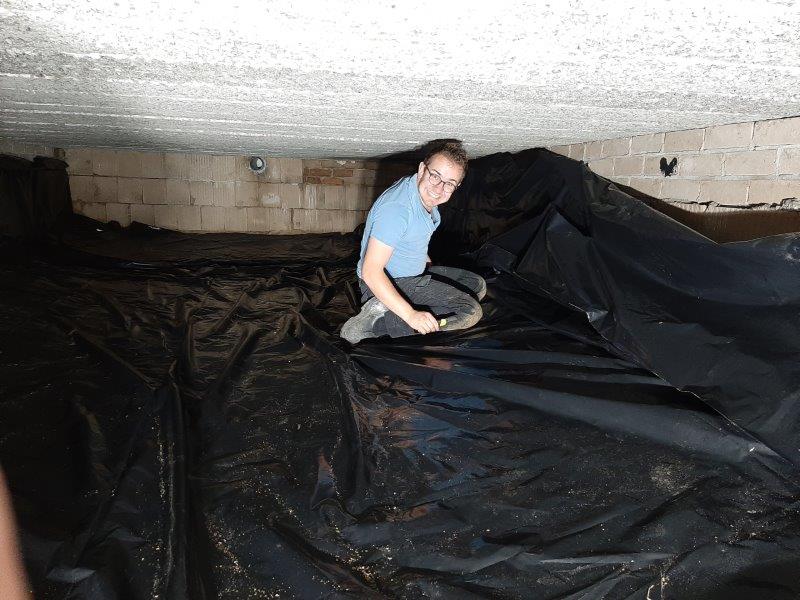 What happens if the storage space fills up with water?

The reception well is fitted with a separate overflow pipe. When the water storage space is full, this overflow pipe directs excess water onto the street. Mr Ploeg has fitted a pond filter mat to the water storage inlet. This mat blocks moss and leaves that are not caught in the leaf traps in the roof gutters. This filter mat needs occasional cleaning. It keeps the water in the storage area perfectly clear and clean.

How can the collected water be used for the garden?

A pressure water pump and a suction well are located at the back of the garage. The suction well is connected to the water storage area. To irrigate the garden, you turn on the pressure water pump. It pumps the water up from the storage area, via the suction well. Subsequently, underground pipes carry the water to the sprinklers in the garden. Mr Ploeg has placed a total of 130 metres of irrigation pipes with six garden sprinklers and nearly 40 metres of drip pipes. The figure below shows the pipe layout. 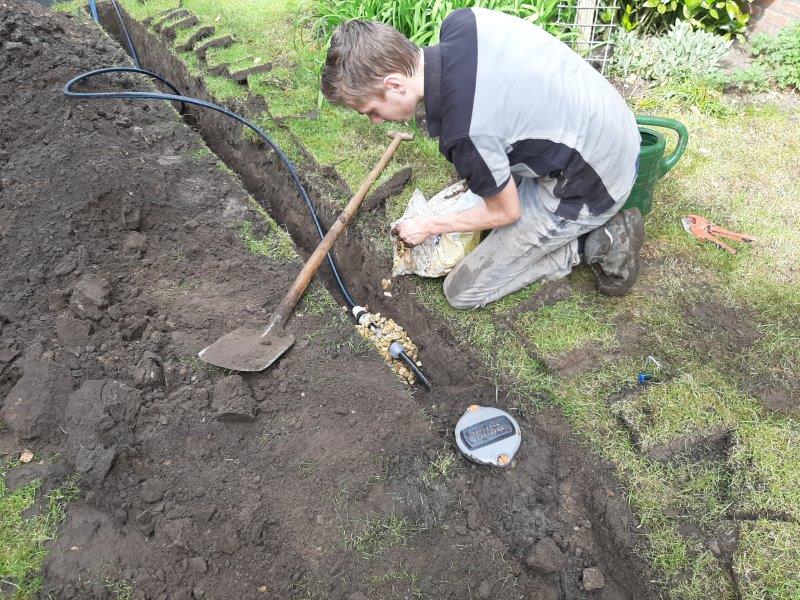 Does the water storage area receive a lot of attention?

Mr Ploeg’s water storage area has sparked a great deal of attention locally. The alderman and municipal staff have visited his home, and the local newspaper has written an article about it. Mr Ploeg is convinced that not many people are using their crawl space in this manner. When designing new houses, architects could consider creating additional room for water storage. The section of the crawl space without any wires or pipes could be water-proofed right away, which would make it suitable for use as a water storage area. At the same time, pipes could be laid in the purview of, e.g., the washing machine or the toilet. Such applications are currently a step too far for Mr Ploeg himself, as they would require a lot of breaking in his house.

How much has the water storage area cost?

The water storage with pump, pipes, and sprinklers has cost approximately 2,300 euros, not including labour. The municipality of Barneveld has provided a grant of 625 euros. Gert Ploeg is quite happy with his rainwater storage: ‘Although it will be a while before I recover my investment, it makes me feel good that I am preventing clean rainwater from ending up in the sewer. Furthermore, I am happy that I am saving a lot of valuable drinking water.’