In the Ruimzicht Oost and Ruimzicht West residential areas in Diemen, perforated drainpipes have been used for the rainwater sewer system. In addition to their draining effect, during the prolonged drought of 2018 the systems were also found to infiltrate polder water in the neighbourhood. As a result, the houses’ wooden piles remained wet, thus preventing decay. Furthermore, the trees remained vital.

In the past, the neighbourhoods were faced with highly variable groundwater levels, causing issues such as wet crawl spaces. During a renovation of the public space, the rainwater sewers were fitted with perforated pipes which directly connect to the surface water. The groundwater level thus stabilised around polder level. Such sewers are referred to as DIT – Drainage, Infiltration, and Transport – systems.

Keeping groundwater levels up during drought of 2018 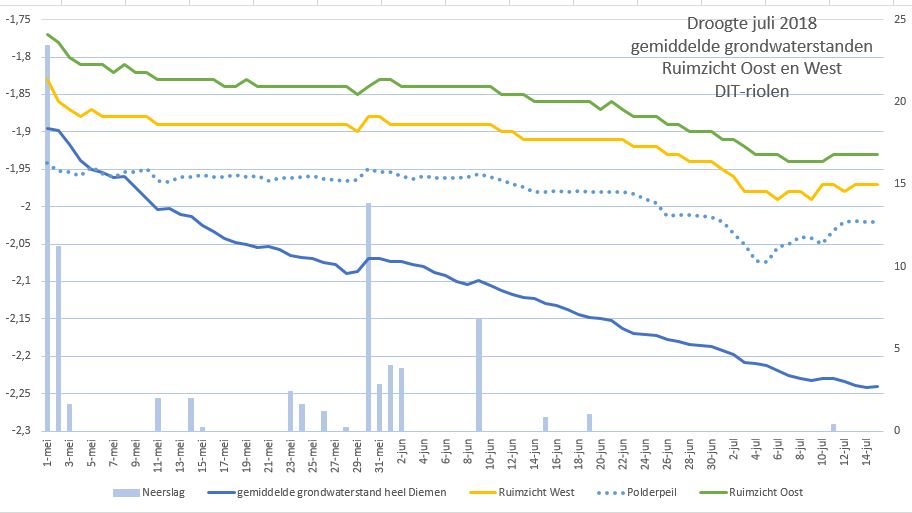 Image: In the Ruimzicht West and Ruimzicht Oost neighbourhoods, groundwater levels follow the polder level and differ widely from the overall average level in Diemen.

In the inspection wells, some flow was even observed; see the short film below. Elsewhere, trees dropped their leaves and plane trees even dropped their bark. The trees in the two neighbourhoods remained vital. But what is even more important, the wooden piles underneath the houses were not exposed, which safeguarded them from decay.

Obviously, the positive results of infiltration by DIT sewers depend on a consistent surface water level. This is the responsibility of the district water board, which has let in drainage pool water into the Diemen polder. Therefore, the effect of this measure depends on the availability of sufficient drainage pool water.

On account of the good drainage and infiltration performance of the DIT sewers, Diemen is going to design all its future rainwater sewer systems with such perforated drainpipes, including in neighbourhoods whose houses are founded on concrete piles. In these neighbourhoods, keeping greenery vital during dry periods will be the goal. This also fosters the combat of heat stress and the preservation of biodiversity.