Urban flooding is one of the four issues addressed by the Delta Programme, along with drought, waterlogging, and heat. Climate change is causing the sea level to rise. During the twentieth century, the rise amounted to some 20 cm, and in the future the rise will continue, possibly at an accelerated pace. Securing flood protection is a top priority in the Netherlands. Yet, despite our expertise and efforts in the field of flood risk management, some risk of urban flooding will always remain. This page provides a brief explanation of the urban flooding issue and links to other relevant pages within and beyond the Knowledge Portal.

What can increase the risk of urban flooding?

As temperatures rise, so will the sea level, as a result of the expansion of sea water, glaciers and minor ice caps melting, and the gradual shrinkage of the major ice caps covering Greenland and Antarctica. Sea ice, such as in the North Pole region, does not add to the rise in sea level. Furthermore, the soil in the Netherlands is subsiding by a few centimetres every century. This subsidence is caused by peat oxydation, soil settling, and time lags of the last ice age. Soil subsidence is adding to the relative rise in sea level in the Netherlands.

According to the KNMI’14 scenarios, the sea level along the North Sea coast may rise by between 15 and 40 cm by 2050. By 2100, the rise may even run up to 100 cm. However, recent studies indicate that the processes affecting the melting of Greenland and Antarctica land ice are progressing at a faster rate than originally assumed. River discharges may also increase as a result of climate change. Recent studies and climate scenarios show an increase in Rhine discharges in winter. This can primarily be attributed to the additional precipitation and rising temperatures: higher temperatures mean that less water is retained in the form of snow. In the Meuse catchment area, discharges may also increase as a result of increased precipitation.

What is the impact of higher water levels in the Netherlands?

Without additional measures, the rising sea level can lead to an increased risk of urban flooding. Increasingly more sand is required to allow the coastal foundations to keep pace with the rising sea level and to compensate for erosion. Storm surge barriers will need to close increasingly frequently. In addition, a rising sea level may result in salinisation. Saline water can intrude into the soil (brackish water seepage) or via the river estuaries into surface water. Brackish water seepage occurs primarily in the coastal areas, deep polders, and reclaimed land. At certain locations, soil subsidence can accelerate this salinisation process. Salinisation via surface water is affected by the combination of sea level and river discharges. The higher the sea level and the lower the river discharges, the stronger the salt-water intrusion. Salinisation can jeopardise the freshwater supply and cause damage to nature and crops.

Higher river discharges and higher water levels increase the hydraulic load on dykes. Whether, and to what extent, the dykes will be affected also depends on measures implemented in Germany. Increased water storage in Germany, e.g., by regulated urban flooding, will lower peak discharges in the River Rhine in the direction of the Netherlands. Not only the climate is changing, the population in the areas protected by dykes is gradually increasing, as is the economic value accommodated in such areas. For this reason, the protection level of the dykes is regularly reviewed and upgraded, considering that the inundation of an area may have a major impact. Urban flooding can damage buildings and infrastructure, lead to casualties (deaths and injuries), and disrupt society.

More information on the risk of urban flooding, flood depth, evacuation options, and potential impact-reducing measures in the Netherlands is provided in the Climate Impact Atlas. The Spatial Adaptation standardised stress test information leaflet indicates how the atlas can be used to map out an area’s vulnerabilities.

How can we contain the impact of urban flooding?

Dutch flood risk management in structured in multiple “layers” and is, therefore, referred to as “multi-layer flood risk management”. This approach entails that the risk of urban flooding is contained by a combination of flood defences, spatial planning, and disaster control:

The Delta Plan on Flood Risk Management ensures proper protection. The first layer – prevention – is effective. However, some risk will always remain. That is why layers two and three are also important. In addition, it is essential for residents to be properly prepared for a flood. Several measures can be taken if there is a chance of flooding: 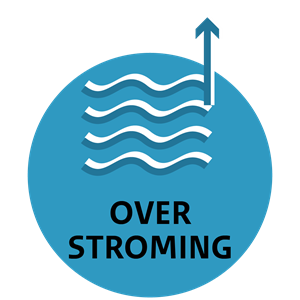