The Vierde Bergboezem nature reserve and recreation area is located north of the city of Breda. Since 2010 it has served as a water storage area that helps to protect the Breda centre against flooding. Any excess water flowing through the Mark in Breda during extreme downpours can be temporarily stored in the Vierde Bergboezem.

What type of area is the Vierde Bergboezem?

The Vierde Bergboezem spans 276 hectares and comprises the subsections of Hooijdonk, Werft, Lange Bunders, Slangenwijk, Molenpolder, and Buitendijks Slangenwijk. It features various types of landscape, such as quagmired grassland, moist meadowland, swamps, and restored river dunes. These river dunes are referred to as “donks”. The Brabantse Delta district water board, the province of Noord-Brabant, the municipality of Breda, and Staatsbosbeheer [Dutch government organisation for forestry and management of nature reserves] have joined forces to create a water storage area in which herbs and flowers grow, and which is home to a wide variety of wildlife. In the development process, they have capitalised on the area’s rich cultural history, such as the seventeenth-century line dykes. 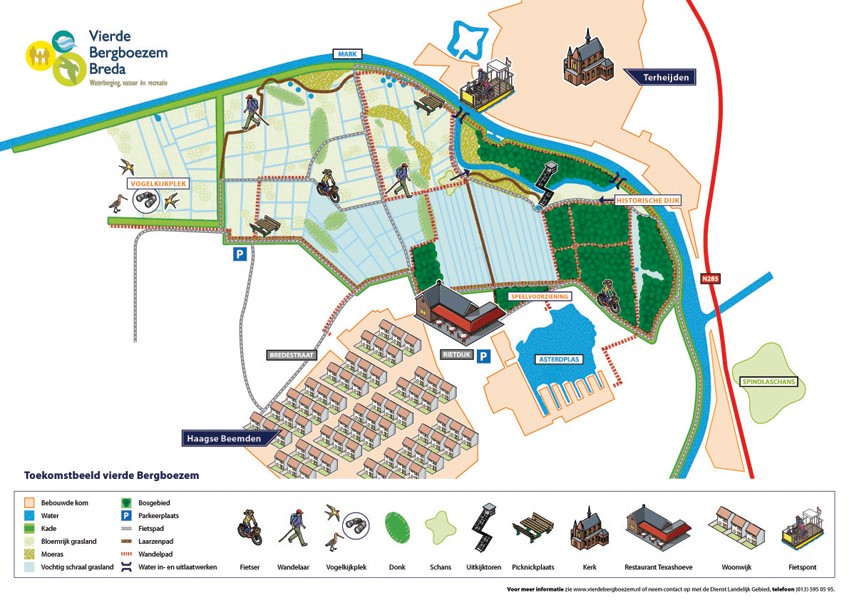 What measures have been taken?

In order to convert the Vierde Bergboezem into a water storage area, the parties have taken the following measures:

What results have been achieved?

Prior to 2010, three water storage areas helped to protect the city of Breda against flooding which occurs once every fifty years: Weimeren, Rooskensdonk, and Terheijde. The Vierde Bergboezem ensures that Breda is also protected against flooding that occurs once every one hundred years. Furthermore, the Vierde Bergboezem area accommodates the Haagse Beemdenbos forest. The intention is for this forest to eventually develop into a marshy forest which is prone to flooding and which will attract more amphibians, beetles, and birds.

In 2014, the parties also created a forest playground for children, just outside the Vierde Bergboezem area: Brakkenbos. This tied in with the Play Action Plan of the municipality of Breda, which aims to create more locations in the natural environment where children can play.