The increase in heat, drought, precipitation, and sea level rise caused by climate change entails risks for our economy, health, and safety. If we refrain from taking action, we will be faced with tremendous damage in the future. To prevent this, we need to render our built and rural areas climate-proof and water-resilient. This calls for a national strategy, under which climate adaptation is embedded in policy and implementation at all the government levels. This strategy is being pursued under two programmes: the national Delta Programme and the National Climate Adaptation Strategy (NAS). This page provides more details on the two programmes, on governmental schemes, and on national initiatives that foster collaboration and knowledge exchange.

Would you like to find out more about international developments in the field of climate adaptation? The International page lists interesting international websites and reports from bodies such as the European Union and the IPCC.

What is the national Delta Programme?

The national Delta Programme sets out how the government is protecting the Netherlands against flooding, ensuring a sufficient supply of fresh water, and working on a climate-proof and water-resilient layout. Under the Delta Programme, the national government, provinces, municipalities, district water boards, Rijkswaterstaat [the executive branch of the Ministry of Infrastructure and Water Management], and several NGOs are collaborating on these taskings, under the auspices of the Delta Programme Commissioner. The programme is structured on the basis of three issues:

In the Delta Programme, the strategies pertaining to these three issues have also been elaborated at the regional level. For each region, a separate Preferential Strategy has been drawn up.

All three sub-programmes comprise a Delta Decision and a Delta Plan:

The Delta Programme annually monitors and assesses how the Delta Decisions, Preferential Strategies, and Delta Plans have been elaborated and implemented up to that point. The Delta Plan on Spatial Adaptation is also monitored annually. The annual monitoring report can comprise proposals for policy adjustments, e.g., based on new developments or obstacles.

What is the National Climate Adaptation Strategy (NAS)?

The National Climate Adaptation Strategy (NAS) is the overarching Dutch strategy relating to climate adaptation. The NAS Strategy, dating from 2016, sets out the main climate risks for the Netherlands and charts the course for tackling these risks. The NAS programme team has translated this course into plans and actions, set down in the 2018-2019 implementation programme. This programme is focused on sectors, chains, issues, and climate risks that are not covered by the Delta Programme or the Delta Plan on Spatial Adaptation; it also complements several issues that are addressed in the Delta Programme or the Delta Plan. In its 2020 report entitled “National Climate Adaptation Perspective”, the team looks back on what has been accomplished up until then and presents a perspective for the future.

If we want to have the Netherlands climate-proof and water-resilient by 2050, we will need more than money and ambition. Implementing climate adaptation all across the Netherlands, in appropriate ways, requires knowledge and collaboration. The Climate-proof Together network and the City Deals are initiatives aimed at promoting collaboration among various parties. The Climate-proof Cities focus area, and the Global Center on Adaptation, are initiatives aimed at developing and sharing climate adaptation expertise. The aim of the OSKA partnership is to promote accommodation of climate adaptation in terms of standards. More details are provided below.

In order to protect the Netherlands against the impact of climate change, it is important for governments, residents, businesses, and NGOs to join forces. This is why the Climate-proof Together was created: a network intended for and operated by professionals who seek to render the Netherlands resilient against climate change. The Climate-proof Together team can assist you in pursuing climate adaptation, for example, by sparring with you, by putting you in touch with other parties, or by sharing a good initiative or idea through national media.

The Global Center on Adaptation (GCA) is an organisation that has been fostering global climate adaptation since 2018. GCA encourages countries, organisations, and businesses to share knowledge and to collaborate on climate adaptation, in order to be better protected against the impact of climate change. Since 2021, the GCA headquarters has been located in the Floating Office Rotterdam, the largest floating office building in the world.

The Climate Adaptation Standards Consultation Committee (in Dutch abbreviated to OSKA) focuses on standards. Examples of standards are norms, guidelines, and manuals. Standards play an important part in the design, construction, and maintenance of buildings, infrastructure, and public space. OSKA involves collaboration between government bodies, the business community, research institutes, and standardisation organisations. Their aim is to ensure that climate adaptation will quickly be incorporated into new and existing standards. 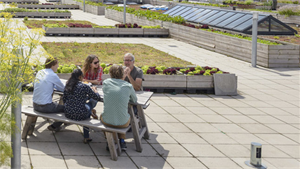 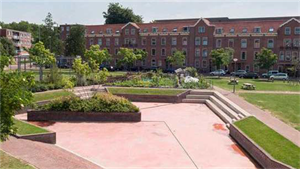 Read more about the Delta Plan on Spatial Adaptation