Gijsbert Dirkzwagerstraat is a new street amidst other houses in the small blue-collar neighbourhood called ’t Stort, located in Maassluis city centre. In this street, 27 energy-efficient social rental homes have been constructed, specifically intended for young families. The outdoor area is the first street in Maassluis to be entirely “rain-proof”: the entire street is aimed at retaining water and capable of coping with 60-mm torrential rain. 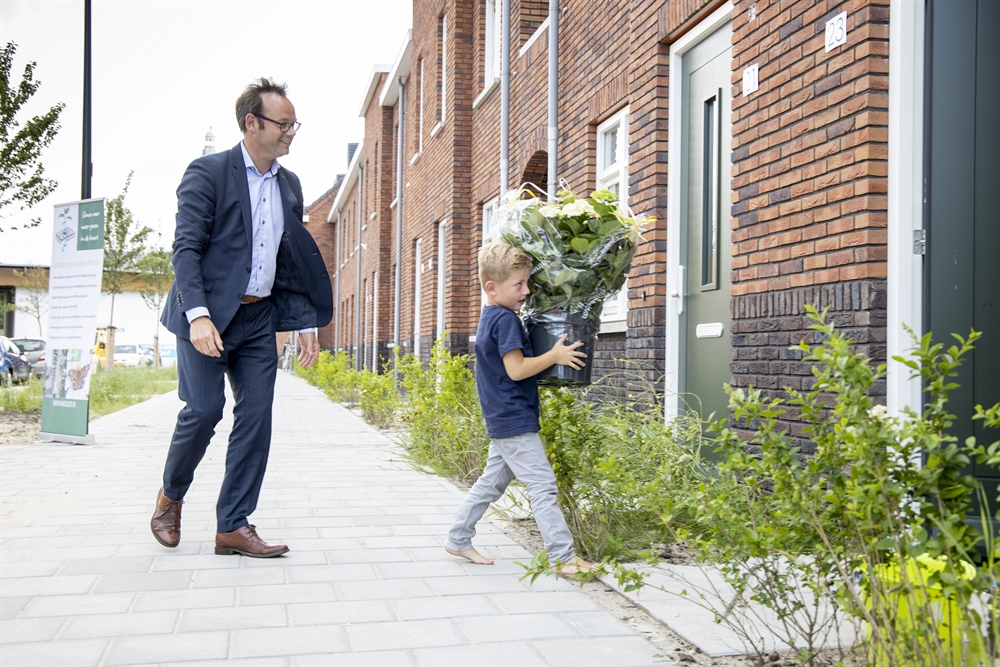 What has prompted the construction of this new street?

’t Stort is a densely developed, pre-war blue-collar neighbourhood in the Kapelpolder industrial estate, adjacent to the Maassluis historic city centre. Because of its dense development, the neighbourhood is prone to waterlogging during torrential rain. In addition, the expansive black roofs of the industrial buildings exacerbate heat stress in the area. Gijsbert Dirkzwagerstraat used to accommodate industrial facilities. The municipal plan to re-develop this area into a residential street opened up opportunities to rain-proof the street.

How has the municipality set about the project?

In 2018, Maassluis joined Rainproof. This network intends to rain-proof cities in order to cope with the severe downpours that are occurring increasingly frequently. One of the measures used to this end is increasing the sponge effect of the soil. This boosts the rainwater retention capacity of the soil, similar to a sponge absorbing water. Maassluis wants to implement such measures and has set about the development of Gijsbert Dirkzwagerstraat as follows:

Furthermore, the municipality is investing additional sums in greening the city, and aims to interconnect different water buffers wherever possible.

What results have been achieved?

This approach has turned Gijsbert Dirkzwagerstraat into a green street capable of infiltrating some 7 mm of water during rainfall. At least two-thirds of every garden is green, and all the sheds have a green rooftop and a rain barrel. The street is designed in such a way as to easily cope with downpours up to 60 mm. The street has already seen several heavy showers and coped well with all of them.

A special feature of this project is the combination of public and private. The municipality is investing in greening and rain-proofing the street, whilst concurrently encouraging residents to rain-proof their gardens. As a matter of fact, this is not entirely non-committal: the tenancy agreement stipulates that gardens may be paved up to a maximum of one-third.

Lessons to be learned from the project

Maassluis has learned a great deal from this project. These are the main lessons to be learned: