Climate adaptation and monitoring in Bospolder-Tussendijken neighbourhood in Rotterdam

Between 2018 and 2019, the common enclosed garden of the Schans-Watergeus complex in the Rotterdam neighbourhood of Bospolder-Tussendijken was climate-proofed. To this end, the Havensteder housing corporation joined forces with the Klimaatkrachtig Delfland climate adaptation initiative, the municipality of Rotterdam, Vanschagen Architects, and other parties. Upon completion of the work, the municipality of Rotterdam and Antea Group embarked on the monitoring of the adaptation measures. 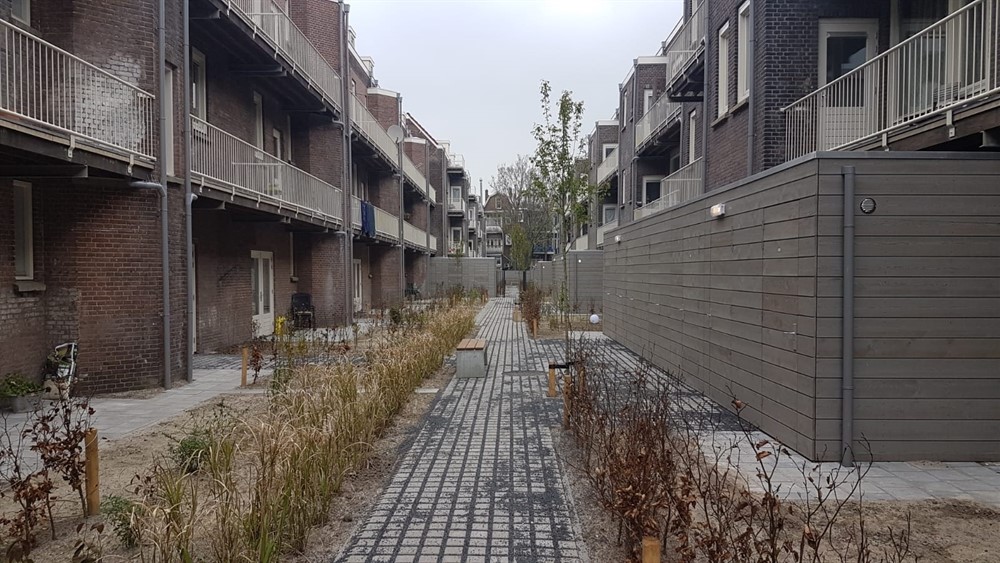 What measures have been implemented?

The common enclosed garden has been greened and provided with permeable paving: the tiles in the garden feature open joints, allowing the water to infiltrate into the soil. The entire garden is fitted with infiltration crates underneath the permeable paving to collect rainwater. The downspouts on the roofs of the surrounding buildings are connected to these infiltration crates. Thus, the enclosed garden is capable of collecting thousands of litres of water. Furthermore, the Schans-Watergeus complex has been fitted with, among other things, new roof insulation and a new ventilation system.

Monitoring of the enclosed garden

For the Havensteder housing corporation, Schans-Watergeus was one of the first projects in which climate adaptation played a key role. Consequently, the project raised many questions: How efficient are the water storage provisions? How much water is actually collected? And does the greenery provide additional cooling in hot weather? Antea Group and the municipality of Rotterdam have monitored the effects of the measures in order to gain clarity regarding these issues.

The municipality of Rotterdam has investigated whether the infiltration crate system operates appropriately. In the enclosed garden soil, a gauge tube was placed, which uses a sensor to measure groundwater levels. Municipal measurements show that in 2020, during two heavy downpours, water has accumulated in the crates, which means that the storage provisions are doing their job. Even though groundwater levels rise during heavy downpours, such precipitation does not result in waterlogging. Furthermore, the infiltrated water can easily run off to the surrounding area.

Waiting to see whether storage will also work during extreme downpours

The water storage provisions have been designed for extreme downpours, but no such precipitation has fallen yet. This means that the municipality will have to wait and see whether the water storage provisions will also work appropriately under such conditions. Another question is whether the soil will gradually silt up in the future, which would hamper the infiltration of rainwater. In the years ahead, the municipality will continue to monitor this. The authorities are also examining whether replacement of the sewer system or changes in the groundwater system may affect water storage.

The Antea Group engineering consultants have examined how the greened garden is affecting local heat stress. Their study shows that heat levels in the enclosed garden have decreased, because a large proportion of pavement has been replaced by greenery. During heatwaves, the green garden provides a cool space for residents. The consultants expect the maximum temperature to fall even further once the trees and shrubs grow bigger.

This project has enhanced the collaboration between the parties involved. For the Havensteder housing corporation, it has also laid the foundations for the Climate-adaptive Real Estate programme. This programme maps out the taskings, risks, and opportunities that climate change involves in terms of real estate. In addition, this project has generated the following lessons to be learned: