The Living with Water [Leven met Water] map compiled by the Cultural Heritage Agency of the Netherlands visualises how the Dutch have been attempting to control the water for many centuries. For example, through dykes that protect us against flooding, lakes that have been reclaimed in order to be used as farmland, and areas that were inundated in order to stop the enemy. The map provides information on a wide range of structures and areas involved in water management.

The Living with Water map is intended for:

How can the map be used?

The Living with Water map provides inspiration for addressing spatial taskings. For example, the use of existing historical structures in the purview of current or future taskings. A case in point is the Hollandse Waterlinie – a strip of land that, in the old days, was flooded as a defence line – which is now being used for water storage. The map bundles nine map layers. One of these is the Sluices, Locks, and Weirs layer, which features all the historical structures listed as a sluice, lock, or weir. It also contains a map layer featuring all the polders, a map layer featuring more than 11,500 dykes or dyke sections that are important from a cultural-historical perspective, and several historical maps. Multiple map layers can be viewed concurrently, which shows how they are interrelated. The map layers can be downloaded, and each map layer comes with a brief explanation. Furthermore, each map comes with several appendices providing additional information and a brief visual instruction on how to use the map.

Who has developed the map?

The Living with Water map has been developed by the Cultural Heritage Agency of the Netherlands under the Landscape Atlas project. The Windmills and Pumping Stations map layer has been compiled with the assistance of two Dutch organisations involved in the preservation of pumping stations and windmills, Nederlandse Gemalenstichting and De Hollandsche Molen.

The maps are kept up to date and revised approximately twice a year. The most recent update is listed under the meta data in the map. 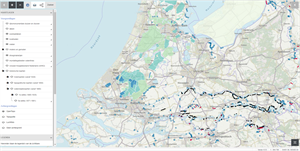 Go to the Living with Water Map