Urban policymakers are faced with a major challenge: how do you develop an urban construction programme that is capable of accommodating the changing climate, whilst safeguarding the continued liveability of cities? This is the question that underpins the “Urban Balance” game. Urban Balance is a board game in which urban development (the battle for space, between housing and room for greenery and water) is simulated in an existing urban context.

The game can be played by 3 to 6 players assuming three roles: government, developer, and consumer (resident). The game can be used for various purposes, e.g., in the initial phase of a project, staff training, or as a component of a study programme.

A game of Urban Balance will:

Download the flyer (pdf, 387 kB). for more information on the Urban Balance game. 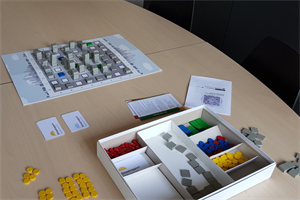